Interview with Ernesto Lizcano and Israel Monroy of CJM: Coalition for Justice in the Maquiladoras
Questions by: Justin Akers Chacón
Interview conducted by: Arny Brenes and C. Gabriela Gonzalez
TELL US about TRW Automotive in Reynosa.
Ernesto: TRW is an international company with facilities in 28 countries throughout the world. Three of its maquiladoras are in the city of Reynosa in Mexico. Worldwide, there are approximately 62,000 people employed by TRW, and we are currently in a struggle against this company that mostly makes seat belts for car brands such as GM, Ford and Chrysler.
For many years, we have been subject to violations of labor rights in Mexico by companies established along the border. Now we have formed a coalition of workers in response to the company wanting to send us from one maquiladora to another, without any type of agreement, but unilaterally, to benefit the company. They didn't take the employees into account, so we formed the coalition to sue the company.
Read more »
No comments: 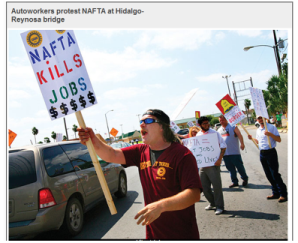 HIDALGO — Autoworkers from Michigan shouted for an end to free trade Monday afternoon on the Mexican-American border, where relaxed trade restrictions have fostered rampant economic growth.

As the 18 or so members of the Local 174 of the United Auto Workers union from Romulus, Mich. waved signs at drivers approaching the Hidalgo-Reynosa International Bridge, maquiladora workers in Mexico gathered on a street corner to protest what they say is an unfair dismissal of workers.

“We’ve been losing our jobs at such a rapid pace; this is a sign of desperation,” said local UAW president John Zimmick. “We would not be down here if President Bush was in office — we’d be wasting our time.”

With President Barack Obama in office and Congress under Democratic control, Zimmick said union workers believe their concerns about the decline of American manufacturing in favor of cheaper labor in foreign countries will actually be heard.

“This country needs to protect its workers,” he said.

Since the North American Free Trade Agreement relaxed trade regulations in 1994, the Rio Grande Valley’s economy has expanded rapidly. The Mexican maquiladora industry boomed and the growth infused the Valley with more money and a rush of migrants. The area even brushed aside a brief recession in 2001.

The growth in manufacturing along border came at the cost of thousands of jobs and factories across the U.S.

During the presidential campaign, then-Sen. Barack Obama repeatedly mentioned the loss of 1,600 jobs in Galesburg, Ill., where a Maytag plant closed in 2004. Those jobs moved to Reynosa.

Recently, 57 employees at Kohler Co. plant in Searcy, Ark. were informed they would lose their jobs when the company shifts their production line to a Reynosa maquiladora.
Sandy Bruce, a quality technician with Lear Automotive, said that she’s watched jobs at her company flee to factories outside the country for more than a decade.
“We all need to stand up and fight,” she said. “Or there’s going to be nothing left for my family.”
As protesters weathered the South Texas sun at the apron to the international bridge on the U.S. side, about 20 former employees of TRW Automotive gathered on a street corner on the Mexican side in a mirror demonstration.
Gumercinda de la Cruz, wore the automotive supplier’s blue company shirt, as did many of the other former workers. She said that they were demonstrating because TRW unfairly dismissed workers who tried to negotiate better labor agreements.
Some of the workers had actually traveled to Detroit in September to meet with executives from TRW, which makes seat belts for U.S. car companies. The executives refused to meet.
De la Cruz said that TRW targeted higher-paid workers when they consolidated operations at its Reynosa plants. She alleged that those workers were not provided the severance pay required under Mexican law when they were fired.
She accused TRW of firing workers who helped organize the TRW Workers Coalition to negotiate better contracts. She alleged that TRW also blacklisted the workers, making it impossible for them to find new jobs at other area maquiladoras.
TRW could not be reached for comment after business hours.
Sean Gaffney covers business, the economy and general assignments for The Monitor. He can be reached at (956) 683-4434.
No comments: 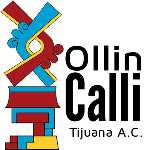